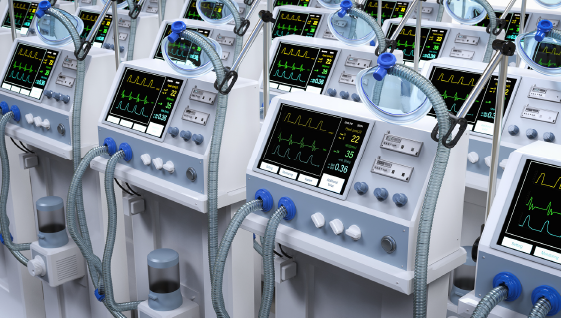 Certifying safe and reliable medical devices during a pandemic

As COVID-19 began spreading throughout the world, many companies had to shut down and their business came to a halt. Others were deemed “essential businesses” so work could continue for life-sustaining services. Thankfully, Energy Assurance was deemed “essential” allowing us to best assist our clients, and in one case, play a small part in the global response to the COVID-19 pandemic.

Inventus Power, the leading provider of battery and power systems for global OEMs, was also one of these essential businesses working to supply batteries for a major medical device manufacturer.

As critical medical devices like ventilators were needed to fight the pandemic, Inventus Power was in a position to ramp up production of battery packs and assist in getting these devices onto the front lines in the battle against COVID-19.

THE CHALLENGE THE SOLUTION THE RESULT

Inventus Power needed to produce ten times the normal rate of battery packs as ventilators were in huge demand. In order to meet this need, they had to find additional sources for cells as its current supplier could not maintain the necessary production capacity. Fortunately, Inventus Power was able to identify another cell supplier that could meet the increased production demands. But with a cell change significant testing and agency approval are required to ensure the new cells would be safe for use in such a critical device.

As one of the only fully-operating battery test labs, Energy Assurance was selected as the testing lab for Inventus Power and the project. We were tasked to complete all testing and approval procedures to certify the battery cell and pack combination produced for use in the ventilators. This included a UL Listing of the new configuration as an approved medical device component along with CB Scheme approval for international regulatory approvals.

With the timing of this project, we knew we’d run into some challenges. Normal testing turnaround time is typically 4-6 weeks but we were tasked with completing testing much faster than that, leading us to believe it was very close to being a part of the national emergency effort. Cell samples were hard to obtain during this time due to supply constraints at the lithium -ion cell manufacturers. This made it difficult for Inventus Power to provide us with the prototypes necessary. And then, even with battery packs ready for testing, UL would need to coincide their efforts to take the reports we generated and secure the agency UL Listing – at a time when communications were already stretched thin.

Energy Assurance was able to help us support a critical medical customer at a very challenging time during the early stages of the COVID-19 crisis. Our teams were able to work closely together to remove all the obstacles to achieve the updated certification. We really appreciate the sense of urgency, resolve, and commitment we received from the entire EA team.”

Energy Assurance was able to obtain “essential business” status to ensure we could perform our critical work unencumbered. But the start of the project aligned with the peak of the pandemic disruption. Ongoing work that had been the norm became a logistical nightmare. Trying to schedule testing procedures proved difficult and delivery services were spotty at best. Every employee was given a letter for their commutes to and from work confirming their status as an “essential worker” and we took extra sanitary and safety precautions. At one point, we had to completely shut down the battery lab for three days to allow for sanitation of the premises.

Inventus Power and Energy Assurance partnered together and committed to getting the project done with a goal to complete it in record time. It was a challenge, but there was a lot at stake.

The full scope of the project included an alternate cell update to IEC 62133-2:2017 standards with a CB report issued in cooperation with UL. Throughout testing, it was imperative to maintain open communication about samples, technical data, schedules, and project milestones. Without close attention to a very complex project, key steps could be impacted leading to a delay in battery approvals.

Our teams worked tirelessly to ensure this project was done efficiently and effectively. In the end, we were able to complete all testing and reporting efforts in less than half the normal amount of time, something almost unheard of, achieving approvals for the vital and urgent ventilator battery packs.

Inventus Power was able to supply their client, the medical device manufacturer, leading to the production and power of more ventilators to aid in the fight against COVID-19.

If you require regulatory or performance battery testing, contact us to see how we can become the only lab you need.